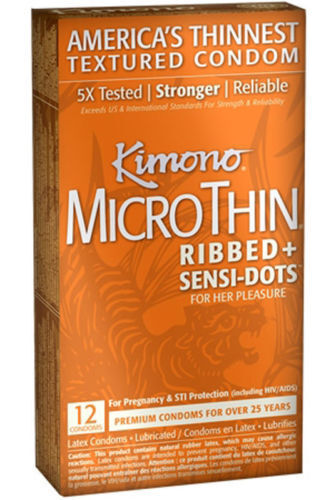 Kimono condoms, available in an assortment of lengths, widths, and thicknesses, are manufactured from a range of materials. Many have distinct features for specific purposes. Condoms are often treated with lubricants and/or spermicides. Kimono also sells lubricants and a vaginal contraceptive sponge.

What materials are condoms made from?

What is a contraceptive sponge?

Kimono sells a vaginal contraceptive sponge made by Today. The Today sponge is completely free from hormones and offers 24-hour protection. The sponge is composed of soft polyurethane and contains a spermicide called nonoxynol nine, which has been in use for more than 40 years. The sponge acts in three ways: by absorbing sperm and creating a physical barrier; by blocking the sperms path to the target ova; and killing sperm via the nonoxynol nine spermicide. The sponge is applied similarly to a tampon. Once inserted, the sponge cannot be felt, and it may be used for multiple acts of intercourse.

What sorts of distinct features do some condoms have?

In addition to a range of condom sizes that include large and small condoms, there are different types of condoms that provide users with different sensations. These condom types include:

Content provided for informational purposes only. eBay is not affiliated with or endorsed by Kimono.