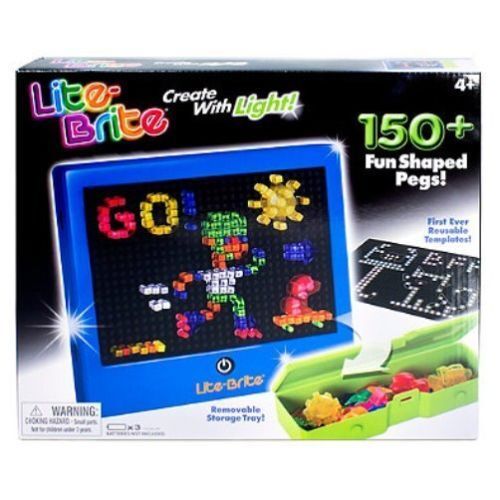 Lite Brite has been a popular toy for generations of children since the late 1960s. In 2011, Time magazine named it as one of the 100 all-time greatest toys, based on its educational value in allowing children to use their imaginations to create unique designs.

What is a Lite Brite?

Lite Brite toys were first introduced by Hasbro in 1967. The Lite Brite unit features a light box full of holes into which colored pegs can be inserted to create a picture, either independently or with the use of an included template design. When the unit is plugged in, the colored pegs are illuminated with a standard light bulb in the back of the unit. Each peg becomes its own tiny light, creating a satisfying glow.

The Lite Brite kit comes with several templates, with additional designs and replacement pegs sold separately. Children can also create their own designs with a plain black piece of paper. The original box for this toy includes the unit itself, several pictures, the light bulb, and a full peg set with eight colors.

What type of Lite Brite refill sets are available?

Children who want to create a new picture can choose from a range of refill sets. There are also refill kits for depicting popular cartoon characters, such as Scooby-Doo and Mickey Mouse. Other choices include:

What peg colors come with the original Lite Brite?

If a peg or light gets lost, replacement peg sets are available to order.

Are there other versions of the Lite Brite?

The original Lite Brite remains a classic with its simple and vintage design. With advancements in technology, Lite Brite has been offered in several different forms over the years, including:

How can Lite Brite help your child to learn?

This toy has been enjoyed by many generations of children and parents because it encourages creative, independent play. When children master the Lite Brite, they can move beyond the preprinted templates to make their own imaginative creations, stimulating their appetite for art and science.

Content provided for informational purposes only. eBay is not affiliated with or endorsed by Lite Brite or Hasbro.