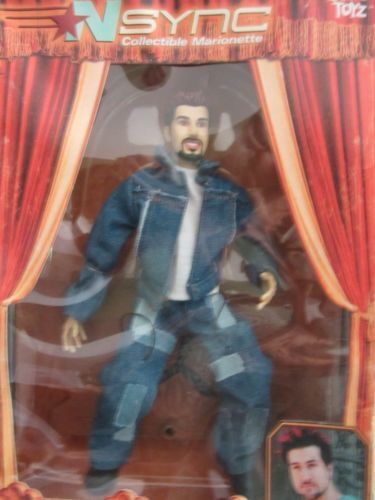 There are several NSYNC memorabilia items available that include references to different collections of albums and times in the bands history. Much of the memorabilia includes individual and group images of Justin Timberlake, Joey Fatone, and Lance Bass during their time with the group. Many of the collectible items relate to the group as it was in the years 1999, 2000, and 2001, spanning several different locations and album releases.

What types of memorabilia can people collect?

NSYNC memorabilia items include posters, stickers, apparel, and figurines, among others. Regardless of the item type, the majority of the items have an NSYNC label on them. Among figurines, Justin Timberlake is the most prominently modeled member of the group. However, other group members of NSYNC are featured and figurines of all group members can sometimes be bought in one package.

Does any memorabilia reference their albums?

Yes, most of the memorabilia items make references to the groups music directly. Several posters of NSYNC with album art can be found for collectors. Albums covered are not limited to a singular option, with many options available. In addition to NSYNC albums, old tickets to concerts may be collected as well. Concert tickets span multiple years and include many different concert venues.

What kinds of items from special events may be collected?

Items from specific events are available in the form of concert tickets as well as some holiday offerings. For example, NSYNC Valentines Day cards from the year 2000 can sometimes be found. In addition to concert tickets, concert promotional posters are available promoting events that took place at different locations. For these items, location and date are variable.

Who are the members of NSYNC?

NSYNC consists of five vocalists: Justin Timberlake, Joey Fatone, Chris Kirkpatrick, Lance Bass, and JC Chasez. The group was active from 1995 until 2002, and their radio hits include songs like "Bye Bye Bye," "Tearin Up My Heart," and "Its Gonna Be Me." Career highlights include selling 2.4 million albums in a single week.

Content provided for informational purposes only. eBay is not affiliated with or endorsed by NSYNC.