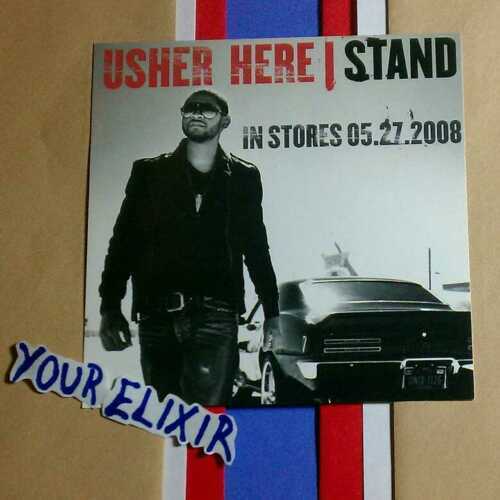 Usher memorabilia is a collection of curated Usher artifacts. This memorabilia set offers products celebrating the artistry of this singer, songwriter, dancer, and actors work. It features products from clothing, albums, tour and concert mementos, signed artifacts, and more.

Who is the musical artist named Usher?

Usher Raymond IV, most often referred to by only his first name, is a singer, dancer, songwriter, and actor. Usher rose to fame in the late 1990s. Billboard put him on their Top 50 R&B/Hip-Hop Artists of all time. He has one diamond album as well as two multi-platinum albums. His music has earned him eight Grammy awards, 18 Billboard music awards, eight American music awards, and nine soul train awards. He founded the Vanity record label in 2002 and is also the owner and tutelary spirit of the record label Raymond-Braun Media Group (RBMG).

Yes, the memorabilia collection offers Usher-related clothing accessories including T-shirts. Some samples of T-shirts are:

What types of artifacts does the memorabilia collection offer?

This collection of art, artifacts, mementos, photos, media, clothing, and artistic eclectica is an homage to the musician and his singing, writing, producing, and acting. It offers products dedicated to the musician and actors many roles throughout his life. Here is a sampling of the items.

There is a set of collectible items that have been directly signed by Ushers hand. This collection of merchandise, ranging from boxer shorts, to posters, to clocks, does indeed offer the signature of the musician and actor.

Does the collection have vintage magazines, media, and concert souvenirs?

Content provided for informational purposes only. eBay is not affiliated with or endorsed by Usher.