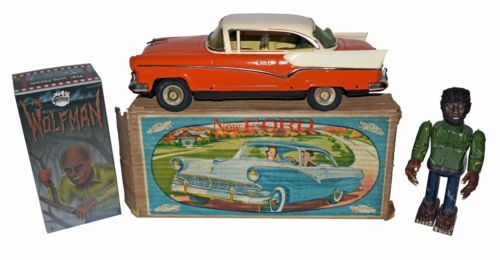 As many antique collectors know, tin litho toys were stamped out of tin plate and painted with chromolithography or hand painted. These colorful objects were treasured by children, and they are now a favorite among collectors. Some antique tin toy enthusiasts focus on collecting certain types of toys while others diversify their collection by acquiring objects from several eras and manufacturers.

What sorts of toys were made from tin?

Tin was normally used to make metal toys in these sorts of categories:

What eras are antique tin toys from?

Older tin toys tend to be rarer, but they are highly sought-after among tin enthusiasts. You can generally find antique toys from these eras:

How do you clean antique tin toys?

You need to be very careful when cleaning tinplate antiques because vigorous cleaning methods could remove paint. If the object has moving parts, gently spray with WD-40 and let it drain overnight to see if you can wind up the toy again. WD-40 or Armor All can also be used to remove oily residues. You can then use a microfiber cloth, canned air, or a dry paintbrush to brush off any other grime. Air dry the old toys after cleaning to avoid streaking or rust.